Everything has been a massive rush this week, and I nearly didn’t get around to posting this. The story was niggling in my mind though and I had to get it out. It’s a bit last minute, so please forgive the roughness around its edges. I hope you enjoy where I went with this one.

This week for the WWBH blog hop we’re using one picture and five words: 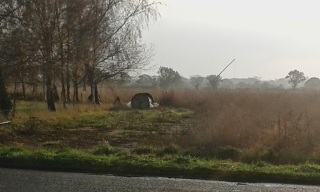 ‘I dare you, go on.’
‘No way, you do it if you’re so interested.’
‘Nah, I’m too scared,’ declared Ryan, ‘you’re much braver than me, so it has to be you.’
‘Hasn’t the novelty worn off yet?’ I asked as my shoulders slumped.
‘It’s alright for you, coming from the city,’ Ryan replied, ‘but tramps in the village is totally new for the rest of us.’
‘He’s been there for three weeks. If he was going to do anything interesting, he’d have done it by now.’
‘Yes, but we only see him on the way to and from the bus stop, don’t we? Who knows what he’s up to during the day when we’re not here to keep an eye on him.’
‘Well, there’s so much choice, I’m sure he doesn’t know where to break into first.’
‘Don’t try and be funny, Will,’ said Ryan, giving me a shove, ‘doesn’t suit you. Just go and have a look in his bunker, that’s all I’m asking.’
‘You really have no morals at all do you? You want me to risk upsetting someone just so you can get a glimpse of his smelly socks?’
‘No,’ smirked Ryan, ‘I want you to glimpse his smelly socks.’
‘Fine.’ I left him and the rest of them on the pavement as I crossed the road and headed down the dirt track. I wasn’t worried, but my palms went sweaty nonetheless. I brushed them on my school trousers as I avoided the toadstools sprouting up through the mud, the bunker suddenly looming large in front of me.
I didn’t even know what I was doing this for. To show Ryan I wasn’t as scared as him? To prove to myself there was nothing to be worried about? A shuffling from inside the bunker made me stop in my tracks, and the ground in front of me began to blur a little. A sign resting up against the bunker read ‘THEY’RE COMING! BE READY!’ At the sight of it my whole body released the tension it had been holding inside. Whoever it was in there, they weren’t a threat to me.
I rounded the corner and got a glimpse inside, and found myself surprised at how spartan it was. I’d expected old bins full of junk, or maybe some kind of camp setup or something. It was empty apart from a single figure lying in the corner, and as I approached I could hardly believe what my eyes were telling me. The figure, whatever it was, certainly didn’t come from around here, that much I was certain of. I was so engrossed in examining it, I didn’t hear the shuffling coming back and stopping behind me, and then a voice whispered right into my ear.
‘They’re coming, are you ready?’
Word count: 463